BILLINGS, MT–In 2006, H-E Parts International was founded to become the leading independent provider of aftermarket parts, components and remanufacturing services to the global surface mining industry. H-E Parts remains constant in offering innovative and practical solutions to customer problems and serves as a high quality alternative to the traditional OEM channels. H-E Parts offers a responsive, innovative and highly competitive option to miners around the world. They offer these products and services through 35 operating centers, delivering parts and remanufactured products with a local presence and team. H-E Parts continuously strives to go above and beyond its competitors in the industry. 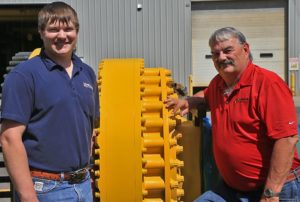 In 2013, Ken Pitman, Vice President of Engineering and Technical Services for H-E Parts International Mining Solutions in Billings, visited a customer in Gillette, WY. One evening at dinner, the customer mentioned that he was having an issue with the life of the bearings on his Komatsu 930E haul trucks. The bearings on these trucks were only lasting about five thousand to six thousand hours—not nearly as long as he needed them to. Why does it matter?Wheel bearing life is typically the single most critical factor in the service life of a wheel group. Ultimately, the shorter life cycle causes a significant increase in customer costs to replace parts, or even worse, the entire machine. The customer mentioned to Mr. Pitman that he was not getting the assistance that he needed from the OEM and asked if H-E Parts could intervene and come up with a solution to increase the life of the bearings.

Following the visit to Wyoming, Ken went back to Montana and approached Lane Gobbs, Engineering Associate overseeing product support and quality control. They studied the front wheel group piece by piece and determined that the key issue of the basic design is that the cooling oil functions as the lubricant for the wheel bearings. The oil passes through several systems including the brakes, hoist and steering cylinders before it ever reaches the bearings. So, even though the oil is filtered before it reaches the brake cooling circuit, it is likely that contaminates from the other systems will be present in the bearings. Another flaw of the original design is when the brakes are applied, the hydrodynamic shearing action of the oil creates friction that slows the truck. This friction heats the oil, which lowers the viscosity of the already low viscosity oil, and then leads to accelerated wear in the bearing elements.

The H-E Parts engineering team went to work on a new design that would solve these issues. They redesigned a wheel assembly that provides better contamination control and lubrication by isolating the two front wheel bearings. Through sealing the area between the spindle and the wheel from the hydraulic system, the new cavity that is created is filled with a higher viscosity oil better suited to the application. This reduces the chance of contamination being carried through the complete hydraulic system causing bearing damage or failure. Rare earth magnets can also be included in the cavity to collect any metallic contaminates that may be generated by or introduced into the system. Overall, the design includes modifications to the existing OEM wheel, spindle, end cover and adds a seal retainer with an installed mechanical face seal to the assembly. The wheel group looks just like any original OEM 930E wheel group. The difference is H-E Parts’ added internal enhancements make it stand out from the rest. The system is designed to pull off of one haul truck and be placed right onto another. 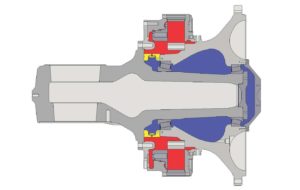 The Komatsu 930E brake cooling circuit utilizes hydraulic system oil in service brakes of the haul truck. To accomplish this, hydraulic oil from the hoist cylinder system is routed through a series of valves and an oil cooling radiator in the top part of the front brake. The oil exiting the oil cooler is at or near engine operating temperature of approximately 185°F. In the original configuration, the brake cooling oil provides cooling and lubrication for wheel bearings.

After studying the bearing lubricating oil properties, engineers determined the use of a SAE 50W synthetic oil would be best suited for this application. The H-E Parts engineers also tested the performance of the system in the field. The test was designed to record variations in the hydraulic oil circuit and in the wheel bearing oil temperatures. The results validated a 22%-25% reduction in bearing oil temperature due to the Birrana™ enhancement. Temperatures will vary dependent upon environment and operating perimeters. Figure 2 displays the separation and oil temperatures in the modified 930E cavity

The oil monitoring system is included as an option in the modification. The system helps to provide ease of sampling and the recording of oil temperatures in the new wheel cavities. It includes a stand-alone temperature sensor unit along with a Birrana™ oil sample plug. The plug helps in the retrieval of scheduled oil sampling, which can be done with ease and no spill. The sensor included in the system is linked to a dual channel data logger located in the cab. This allows for a live readout on the oil temperature in both wheel cavities as well as providing a built-in data log. The data log can be uploaded to a spreadsheet for trending and maintenance record keeping.

Figure 3 shows the results charted using the new oil monitoring system. The x-axis contains the temperature. The y-axis contains the date and time temperature was logged. Throughout the process, the engineers measured the oil viscosity and the seal integrity. Using multiple types of oil with varying levels of temperature properties as well as lubrication properties, they were able to see that there was in fact a drop in temperature in the wheel cavity of the modified front wheel. 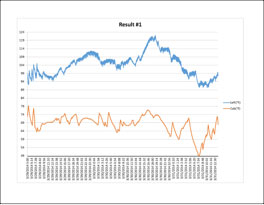 The contamination control system was a vital part of the modification. Originally, if there were failures in the front wheel group, the debris would go back to the hydraulic tank. The tank would act as a strainer. The problem of the tank design was an inability to remove the smaller fragments. If damaged, the steering pump and the hoist pump costs roughly $25,000 to replace. The seal in the new design prevents any of this contamination from occurring if anything should come apart in the cavity or go through the hydraulic system. H-E Parts customers invest millions of dollars in each mining truck. The haul trucks weigh over one million pounds and cost thousands of dollars per hour when out of service. When trucks unexpectedly stop working, some customers experience much higher lost production costs. Critical to avoiding lost production costs are ensuring that all front wheel group components achieve appropriate planned service life.

The engineering team also added H-E Parts proprietary Birrana Control Fit™ bearing pre-load technology to the system. Maintaining pre-load is critical to extending component life. With 185,000lbs on each axle, a lot was riding on this solution. 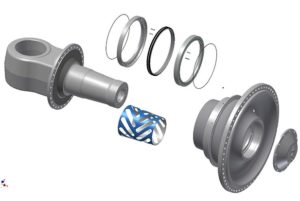 Diagram of the new modification assembly.

H-E Parts International likes to work closely with their customers. Collaboration with the Gillette based customer was key throughout the process for Ken and his team. Once they had a product that they were confident in, the customer eagerly responded with the proper marketing and sales force. Communication amongst both parties was very open and receptive to ideas and criticism. “We wanted the customer to be heavily involved because he is the first to use the product and had to be able to sell it to his superiors,” said Pitman. There was a lot of manufacturing, testing, checking for leaks, fitting, and redesign involved in the process. Pitman said, “Overall it took about six months until we felt that we had a working prototype. The first one was completed in March 2014 and is still in service today. At this point it is approaching sixteen thousand hours, nearly reaching double the initial bearing life. The only thing that has been changed on the truck is an outboard seal not part of the modified design. The last front wheel group they examined had eight thousand hours on it and did not have any problems.”